The Management of Naval Constructions has the capacity to build steel or aluminum vessels of large and small drafts, floating units for logistics and related services (aluminum speedboats, barges, tugboats, tugboats, coast guard, tankers) providing excellent quality in workforce adjusting to contractual time, with the raw materials set by the customer’s technical specifications and construction standards. Achieving to incorporate new fleets to the service as much to the communities as to corporations and state companies. Hence, the productive commitment with the company and the nation does not stop, such that the Coast Guard Vessel GC 24 “Eternal Commander Hugo Chavez” is currently being built, the first boat in its style that is built in the nation and in the Shipyard, and a Service Barge, which will be useful for the production processes of the shipyard.

It is the 4th of a series of twin ships built for the Bolivarian Navy of Venezuela, is a military unit of 1325 tons of monohull type displacement of 76.10 m in total length, a maximum design speed of 22 knots and an autonomy of 4000 miles at cruising speed with good hydrodynamic performance and at sea performance, provided with capacity and services to operate any of the following B-412, AB-212 and AS565 helicopters. The ship is designed to be able to reach the Germanischer Lloyd “Rules & Guidelines. Chapter III, Naval Ship Technology “, provided that it does not interfere with the operational requirements of the ship:

The Coastal Vessel represents a ship with a modern design according to the latest trends in Patrol ships. It is designed with a margin of future growth, which allows the incorporation of new equipment and systems and the improvement in its different equipment and / or systems, incorporates measures of radar and thermal signatures aimed at reducing the probability of detection their vulnerability and achieve high survival for a vessel of this size.

Particular emphasis has been placed on incorporating aspects of design such as automation, human factors, life cycle cost analysis and the use of COTS equipment from the beginning of the design process to reduce the cost of the life cycle of the ship. Among its main characteristics can be highlighted: 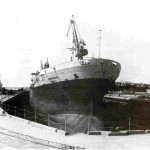 At the Dianca facilities, the Borburata Tanker Ship was built, which started in two (02) sections, due to the limitations imposed by the size and capacity of the launch system currently in use by the Shipyard (Syncrolift System). Has a length of only 125 meters, while the length of the tanker is 189.18 meters, in addition the capacity of the syncrolift is 5,000 tons, 280 less than the weight of the ship already fully bonded.

Before these two (02) situations, DIANCA takes the pertinent measures and determines to carry out the program emphasized in three fundamental points: a) Determination of the cut area; B) Translation and launching of independent bodies, and c) Systems and procedures for joining bodies in Dry Dike.

These phases were carried out according to the following determinations:

A) The determination of the cut zone dividing the vessel into two (2) bodies was defined in such a plane, that both sections or parts of the ship will remain with more or less equal weights and also their hydrostatic characteristics would be compatible with the means available for the launch maneuver.

B) The displacement of the bodies was carried out first by taking the bow body from the construction site to the platform of the Syncrolift, located approximately 130 meters. This transfer was done by towing the section of bow that weighed 2,695,5 tons and had a length of 93,52 meters by means of successive axial movements took the bodies until the platform of the syncrolift, where they were then thrown to the water.

C) For the union of the bodies in the Dry Dock, the following operations were performed:

1.- Enlistment of the pit to receive the two (2) sections.

2.- Installation of the coupling structures for each body.

5.- Alignment of the aft body and support of this over the stalls, while the body remains floating freely.

7.- Joint of the two (2) bodies by means of electric welding procedures.It should be noted that the first phase of the Tank construction was carried out in parallel with civil works, such as:

D) Installation of cranes of 20 and 60 tons that allowed the progress of the work.